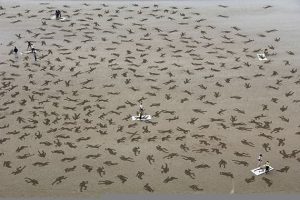 Handout photo issued by Sand In Your Eye of a team of artists and volunteers at work on The Fallen, a massive sand art project on the beach at Arromanches, France for Peace Day 2013. PRESS ASSOCIATION Photo.Picture date: Saturday September 21, 2013. The project was the idea of Bradford artists Jamie Wardley and Andy Moss, they created stencilled drawings in the sand of the 9,000 civilians, German forces and Allies who died at Arromanches on 6 June 1944. The silhouettes of those individuals were drawn on the beach at the rate at which they fell only to be totally erased by the incoming tide, as their own lives were. Photo credit should read: Sand In Your Eye/PA Wire NOTE TO EDITORS: This handout photo may only be used in for editorial reporting purposes for the contemporaneous illustration of events, things or the people in the image or facts mentioned in the caption. Reuse of the picture may require further permission from the copyright holder.